The IAFF Peer Support training course took place this past week. Attendees included members of the police and paramedic services as well as our OPFFA members. The addition of these new members to peer support will help to fill vacancies left by members who have stepped down. Participants expressed a positive response as to the course content and presentation. Thank you to the IAFF peer support instructors, Hugh Doherty and John Drimmie.

Toy Mountain Drop Off: Our HSTP, POL committees and OPFFA Executive attended and participated with the Ottawa Toy Mountain drop off event on December 5th. With the toy wagon  full and the assistance of the crews from Station 11 and 34 (D Platoon) partnered with the team from Bell Media (CTV Ottawa), toys were delivered, organized and packaged for pick up.

Christmas Cheer Breakfast: Through our Charities, members of the executive attended the Ottawa Christmas Cheer ceremony at the Shaw Centre. Just over $106,000 was raised through many corporate, association and individual sponsorships and donations.

IAFF Enquires on Toxicity of PVC Piping: Through the IAFF Canadian office, President Sobey met with representatives from the IAFF and the Public Safety Resource Management from the U.S. who were in Ottawa to seek support from the Ottawa PFFA and Ottawa Fire. They are calling on stakeholders to enquire on the method of testing recognized by the Standards Council of Canada (SCC) through s third party laboratory on flame and heat tests conducted on PVC pipes used in hi – rise structure for plumbing. In the U.S., these pipes have failed to meet the necessary public health and safety standards and are banned in hi – rise buildings. The method of testing is not public in Canada. The IAFF is calling on Canadian Locals and members of the Canadian Association of Fire Chiefs to request information from the SCC on the Canadian test process and results.

RA Christmas Party: Congrats to the RA committee for hosting the Association Christmas party. Santa and his elves were on hand to deliver 240 presents to the children of our members. Thank you to the OFS band and the staff at the Funhaven facility.

Association Meeting: To be held at St. Anthony’s Soccer club, Wednesday, December 11th, 7pm. The agenda will include reports from the President, Treasurers and Committees, swearing in new members, the 2020 OPFFA Budget and Good and Welfare.

Have a good week. Stay safe! 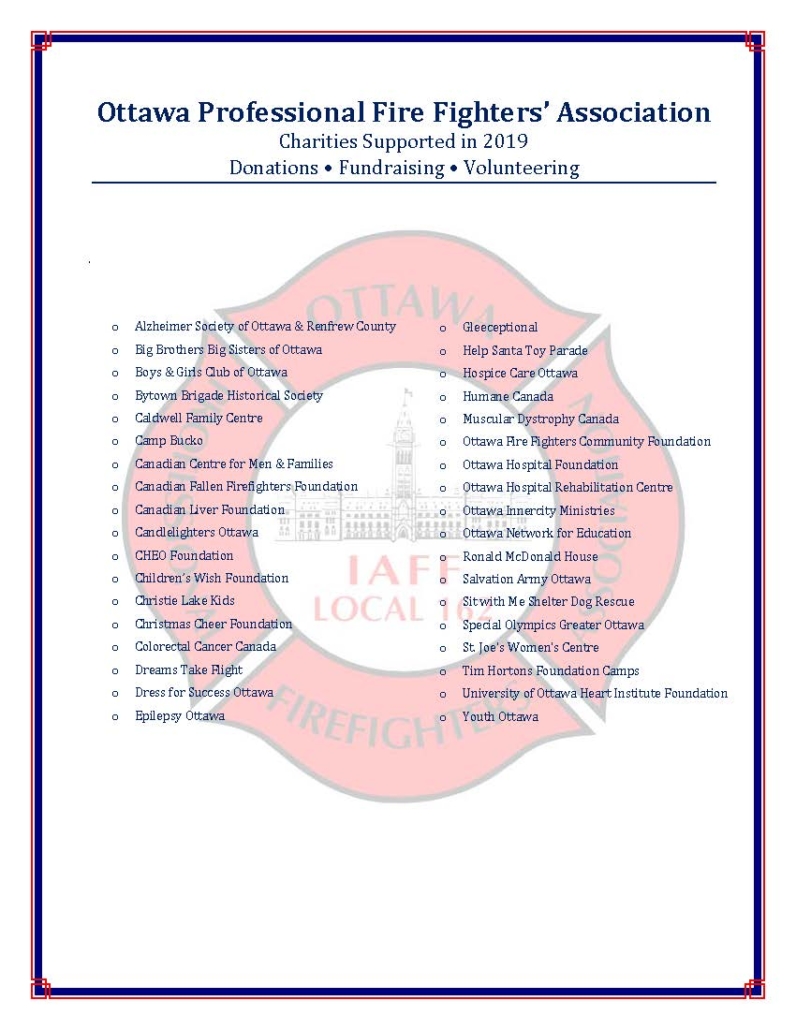